NASA plans to work with Nokia to create 4G services on the moon.

News of October 18 Soon, astronauts on missions to the moon will have no excuses for not responding to text messages. NASA recently awarded Nokia US$14.1 million to deploy a cellular network on the moon. This grant is part of a US$370 million contract signed under NASA’s "Tipping Point" selection program to advance space exploration research and development.

Nokia's plan is to build a 4G/LTE network and eventually transition to 5G. According to NASA’s announcement, this will be "the first LTE/4G communication system in space." "The system can support communications on the lunar surface, with greater distances, faster speeds, and higher reliability than current standards." The announcement also read. 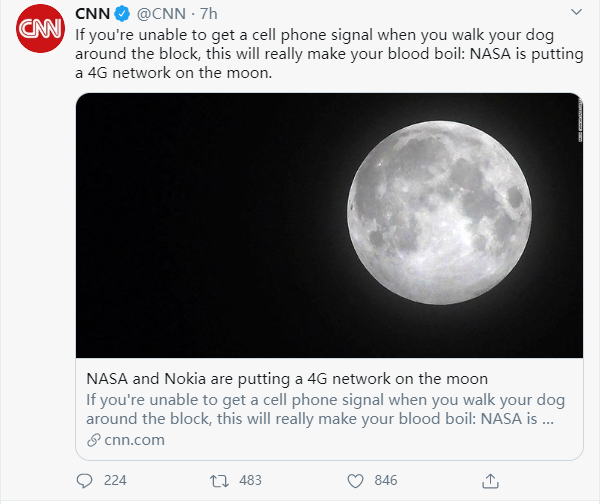 Nokia's research arm Bell Labs provided more details on Twitter, and the company intends to allow the network to support wireless operation and navigation of the lunar rover, as well as streaming video. The construction of the network is compact and efficient, and "specially designed to withstand the extreme temperature, radiation and vacuum conditions of space".

NASA said in the live broadcast that the network will be extended to spacecraft and help develop technology suitable for the moon. NASA Administrator Jim Bridenstine said in the live broadcast that although there is no detailed timetable for this project to become a reality, it is all to support NASA's goal of establishing a lunar base on the moon in 2028.