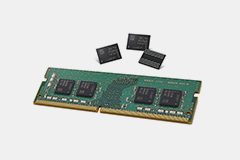 Memory module is a printed circuit board on which memory integrated circuits are mounted.Memory modules permit easy installation and replacement in electronic systems, especially computers such as personal computers, workstations, and servers. The first memory modules were proprietary designs that were specific to a model of computer from a specific manufacturer. Later, memory modules were standardized by organizations such as JEDEC and could be used in any system designed to use them.