Casa > Noticias de la Industria > In the next 5 years, it will exceed 5 billion US dollars, and the analysis of the motor control and driver IC market

In the next 5 years, it will exceed 5 billion US dollars, and the analysis of the motor control and driver IC market

Generally speaking, a motor driver IC integrates CMOS control circuits and DMOS power devices, and it can form a complete motion control system with the main processor, motor and incremental encoder. It can be used to drive inductive loads such as DC motors, stepper motors and relays. The motor driver IC is controlled by a standard TTL logic level signal. It has two enable control terminals, which allow or disable the device to work without being affected by the input signal. There is a logic power input terminal, which makes the internal logic circuit part in low It can work under the voltage; it can be connected with an external detection resistor, and the change can be fed back to the control circuit.

The global motor driver IC market size will exceed US$5.5 billion in 2028

Motor control and driver ICs have been growing in recent years, mainly due to the increasing market demand for high-performance and energy-saving motors, and more and more BLDC motors are used in consumer, home appliances, industry, and automobiles. 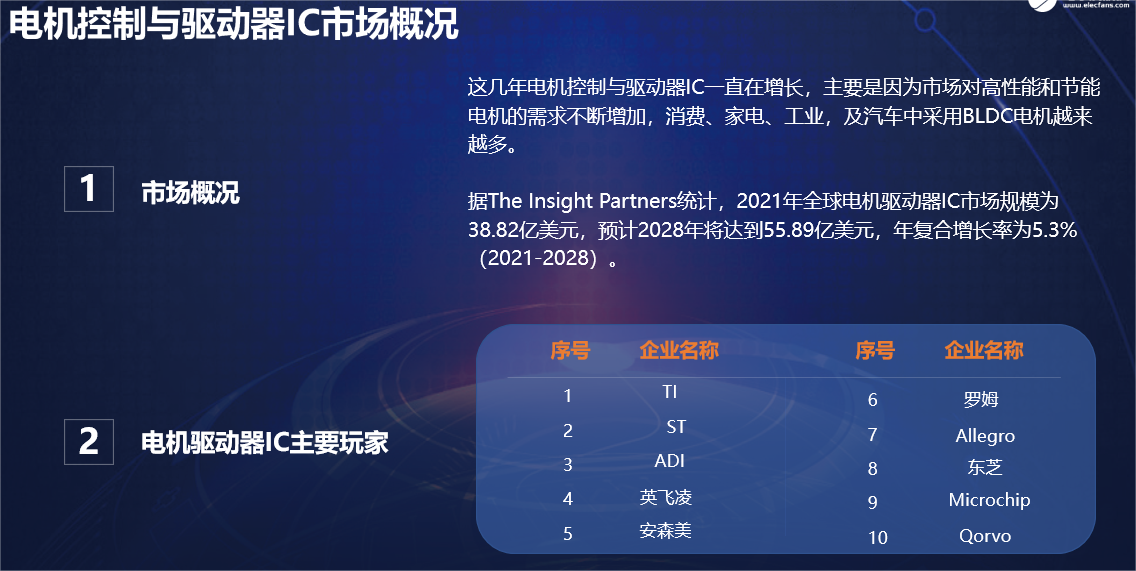 The main players of motor driver ICs are: TI, ST, ADI, Infineon, ON Semiconductor, Rohm, Allegro, Toshiba, Microchip and Qorvo, etc. These 10 companies account for more than 60% of the entire market. 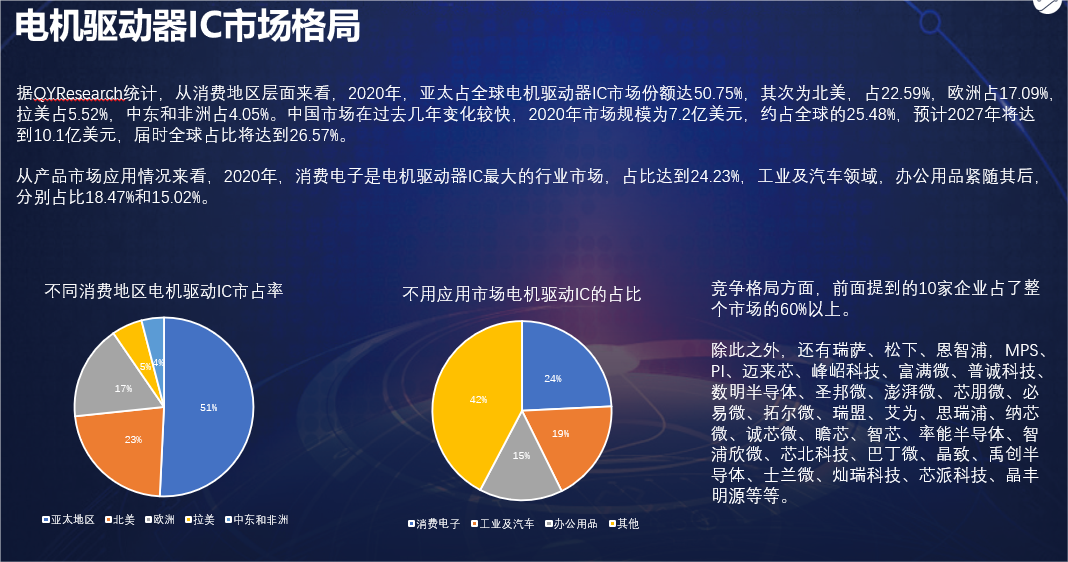 From the perspective of product market application, in 2020, consumer electronics is the largest industry market for motor driver ICs, accounting for 24.23%, followed by office supplies in the industrial and automotive fields, accounting for 18.47% and 15.02% respectively.

In terms of motor controllers, MCUs are the main ones. In the MCU market in China, MCUs from overseas manufacturers are the main ones. The top six MCU manufacturers are Renesas Electronics, Microchip, ST, NXP, Infineon and TI. That's more than 80% of the market share. In addition, domestic MCU companies have developed rapidly in the past two years. At present, there are as many as 20 MCU-related companies listed on the domestic market. There are also BYD Semiconductor, Huimang Microelectronics, etc. that are in the process of listing, as well as Lingdong, Xiaohua Semiconductor, Chip Wangwei, Qinhengwei, Jihai Technology, Huaxinweite, Lingou Chuangxin, Lingxinwei and other well-developed MCU companies.

Also, in the field of motor control, there has been a trend of integration of control ICs and driver ICs in recent years, and many manufacturers have begun to use SiP to integrate the two.

The IC chips used in the controller mainly include SoC, DSP, FPGA, MCU and other types, among which MCU is the most widely used. Last year's MCU market was also very hot. According to IC Insights' report, in 2021, the average selling price (ASP) of MCUs rose by 10% to US$0.64; shipments increased by 12% to 30.9 billion units, and the market size was US$19.7 billion , is expected to grow by about 10% this year to reach 21.5 billion US dollars. From the category point of view, it is expected that the compound annual growth rate of sales of 32-bit MCU will be about 9.4% in the future. grow again.

From the perspective of the market structure, the MCU market in China is mainly dominated by MCUs from overseas manufacturers. The top six MCU manufacturers, Renesas Electronics, Microchip, ST, NXP, Infineon and TI, add up to more than 80%. % market share.

Among the top six MCU manufacturers, Renesas mainly focuses on self-developed MCU cores, but has also launched many Arm core products in recent years. The MCU products of other manufacturers are mainly based on the ArmCortexM core. According to statistics from the official websites of various companies, there are a total of 4,500 ArmCortex-M series products, accounting for 64% of all 32-bit MCU part numbers.

Of course, domestic MCU companies have developed rapidly in the past two years. At present, there are as many as 20 MCU-related companies listed in China, including GigaDevice, Silan Micro, Zhongying Electronics, National Technology, Espressif Technology, Chipsea Technology, etc. , and Huimang Microelectronics, etc. are in the process of listing, as well as Lingdong, Xiaohua Semiconductor, Xinwangwei, Qinhengwei, Jihai Technology, Huaxinweite, Lingou Chuangxin, Lingxinwei, etc. are developing well. MCU Enterprise.

Last year, the MCU market was seriously out of stock, and many industries could not get the goods. I remember that at our BLDC conference last year, many manufacturers came to look for goods. However, the situation has changed this year. According to the information we have obtained, the average inventory of semiconductor companies has reached 8 months. If the goods in the hands of distributors and the goods of the original factory are added together, some companies may have 12 inventories. month. However, the supply of industrial and automotive applications is still somewhat tight.

Another important device in the motor control system is the power device, which includes MOSFET, power IC, IPM, or IGBT and other products. According to the statistics of Xinmou Research, the global power IC market size in 2021 will be 30.5 billion US dollars. Stable in 2022. In 2023, the sharp decline in the price of global semiconductor chips, especially memory such as DRAM, inventory digestion, and market competition will lead to a sharp decline in the global semiconductor market and global power ICs, and then the growth will resume. 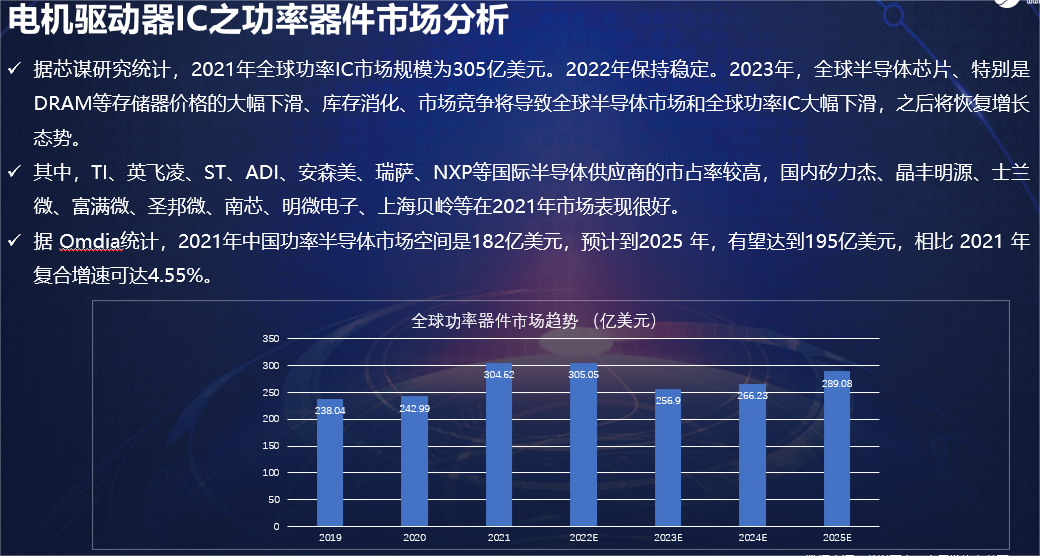 Among them, TI, Infineon, ST, ADI, ON Semiconductor, Renesas, NXP and other international semiconductor suppliers have a relatively high market share. Bangwei, Nanxin, Mingwei Electronics, Shanghai Belling, etc. will perform very well in the market in 2021.

IGBT and SiC MOSFET are currently the focus of power device development. Through combing the channel-end prices of various types of power devices, it is found that since 2022, as the tension between supply and demand has eased quarter by quarter, the prices of silicon-based MOSFET (mainly low-voltage) power devices have shown a significant downward trend. However, IGBT modules, SiC devices and other products are boosted by the high demand in the new energy market, and the overall price performance is relatively strong. With the acceleration of production capacity at home and abroad and the gradual decline in the cost of SiC substrates, SiC devices are expected to usher in a rise in volume and price.

In terms of IGBT, in addition to international manufacturers such as Infineon, domestic companies are also developing well. For example, the car-grade IGBT modules used by STAR in the main motor controller have begun to support overseas markets in large quantities (shipments). According to statistics, in the first half of this year, there have been 500,000 installed vehicles, but mainly A00-class cars, and some A-class cars; It is expected to increase in volume; Hongwei Technology's car-standard IGBTs have begun mass production. In general, there are great opportunities for domestic enterprises.

The global SiC market size in 2021 will be US$1.137 billion, and the compound growth rate is expected to reach 28% in the next five years. At present, the main players are ST, Infineon, Wolfspeed, Rohm, ON Semiconductor and Mitsubishi. There are many new players in China, and the products are mainly SBD, and there are not many MOSFETs.

In terms of GaN, the market size in 2021 is 126 million US dollars, and it is expected to reach 2.1 billion US dollars by 2027. Moreover, there are already applications of GaN products in motor drives. A GaN motor drive solution jointly developed by Nexperia Semiconductors and Shanghai Electric Drive, which is mainly used in A00-class vehicles. In addition, manufacturers such as ST and TI are also developing solutions for motor control systems based on GaNQ devices.

In terms of isolators, major players include international manufacturers such as TI, ADI, and Skyworks (which acquired part of Silicon Labs’ product lines last year), as well as domestic manufacturers such as Nanochip, Chuantuwei, Shuming, and Rongpai. SRIPP has also recently launched isolator products, which are mainly aimed at application scenarios such as factory automation, power automation, motor drive, and power control.

In the future, motor control will develop in the direction of energy saving and intelligence

On October 26, 2021, the State Council issued the "2030 Carbon Peak Action Plan", which focused on promoting energy conservation and efficiency enhancement of key energy-consuming equipment, such as motors, fans, pumps, compressors, transformers, heat exchangers, and industrial boilers. and other equipment as the focus, and comprehensively improve energy efficiency standards.

Then in November 2021, the Ministry of Industry and Information Technology and the State Administration for Market Regulation jointly issued the "Motor Energy Efficiency Improvement Plan (2021-2023)". The "Plan" proposes that by 2023, the annual output of high-efficiency and energy-saving motors will reach 170 million kilowatts, and the proportion of high-efficiency and energy-saving motors in service will reach more than 20%. 28 million tons of carbon dioxide emissions. Promote the application of a batch of key core materials, components and process technology equipment, form a group of backbone advantageous manufacturing enterprises, and promote the high-quality development of the motor industry. Using new motor design, new technology and new materials, reducing the loss of electromagnetic energy, heat energy and mechanical energy to improve output efficiency, the efficiency of high-efficiency energy-saving motors is about 3-5% higher than that of traditional motors.

That is to say, the future market needs more efficient and energy-saving motors, so the motor control industry will also change with the market demand for motors. The future development of the motor control market mainly has two directions, namely, energy saving and intelligence. So how to achieve energy saving and intelligence?

In general, energy-saving control of motors can be achieved in two ways:

One is to adopt more integrated devices and third-generation semiconductor devices such as SiC and GaN. More integrated devices include integrated power MOSFETs, IGBTs, monolithic motor drive ICs, power modules, and more. For example, most suppliers of IGBT modules are constantly optimizing their structure and improving their switching speed and stability. New IGBT devices are very suitable for solving complex motor control problems. At present, most of the driving motor drivers on automobiles use IGBT devices, and of course some manufacturers have begun to try SiC devices. This is because the use of SiC devices in motor control contributes to energy saving and size reduction of motors, coupled with its high integration and reliability characteristics, it is very suitable for use in automotive and industrial automation control applications.

In addition to SiC, there are also GaN devices. Due to their better switching performance and outstanding high-frequency characteristics, some manufacturers have introduced motor drive solutions based on GaN devices. However, at present, the cost of SiC and GaN devices is still a bit high, and the EMC and EMI problems are more prominent. They have not been widely promoted yet.

The second is algorithm and software technology. Motor control requires the support of algorithms. For the same hardware solution, if the degree of algorithm optimization is not the same, the efficiency of the motor will also vary greatly.

In addition, the intelligence of motor control can also be realized from two aspects:

One is to expand the range of perception, that is to say, add more sensors to the motor control scheme, such as vibration sensors, to monitor the operating status of the motor through vibration, and to sense and maintain the motor in advance before the motor fails, or automatically repair.

The second is to use a processor with stronger performance. In the past, DSP was popularly used for motor control, and after evolution, various solutions appeared. In terms of hardware, MCU is commonly used now, and more functions are added to MCU peripherals, such as fast ADC, gate driver, power supply module, and motor control PWM peripherals, etc.; and in terms of software, more functions can be added AI algorithm, such as the processing algorithm of environmental perception information, the identification algorithm of its own parameters, etc.