News on April 14 Yesterday, the International Semiconductor Industry Association (SEMI) pointed out in its "Global Semiconductor Equipment Market Statistics (WWSEMS) Report" that global semiconductor equipment sales in 2020 increased by 19% compared with the $59.8 billion in 2019, reaching US$71.2 billion, a record high.

According to data submitted by SEMI and members of the Semiconductor Equipment Association of Japan (SEAJ), the "Global SEMS Report" summarizes the monthly billing figures of the global semiconductor equipment industry. The equipment category includes wafer processing, packaging, testing, and other front-end equipment, including mask/reticle manufacturing, wafer manufacturing, and fab facilities. 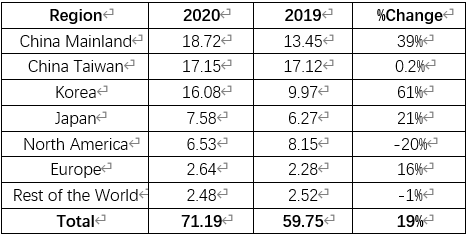 Judging from the ranking of countries/regions, mainland China became the world’s largest semiconductor equipment market for the first time, with sales increasing by 39% year-on-year to US$18.72 billion; Taiwan, China ranked second, after its sales showed strong growth in 2019 , Will remain unchanged in 2020 at around 17.15 billion U.S. dollars; the third-ranked South Korea has maintained a 61% growth to reach 16.08 billion U.S. dollars; further down is Japan, with annual expenditures also increased by 21%; European annual expenditures It also increased by 16%, because both regions recovered from the 2019 economic recession; after three consecutive years of growth, North America’s revenue fell by 20% in 2020. .

On the other hand, the latest report released by market research organization Gartner shows that the total global semiconductor market revenue in 2020 is 466.2 billion US dollars, an increase of 10.4% over 2019. 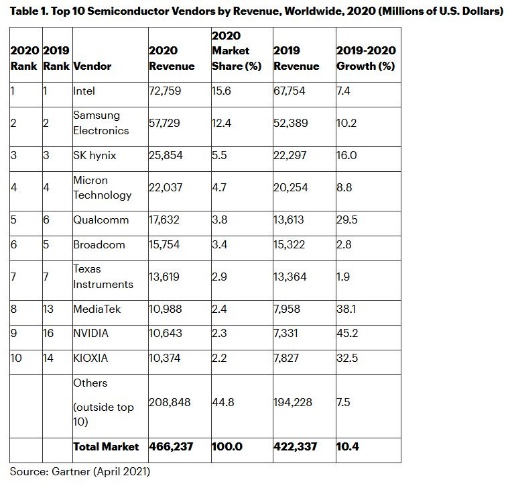 Intel will remain the world's largest semiconductor supplier in 2020, followed by Samsung Electronics, SK Hynix and Micron. Among them, Intel's semiconductor business revenue increased by 7.4% compared to 2019, mainly due to the growth of its core client and server CPU business.